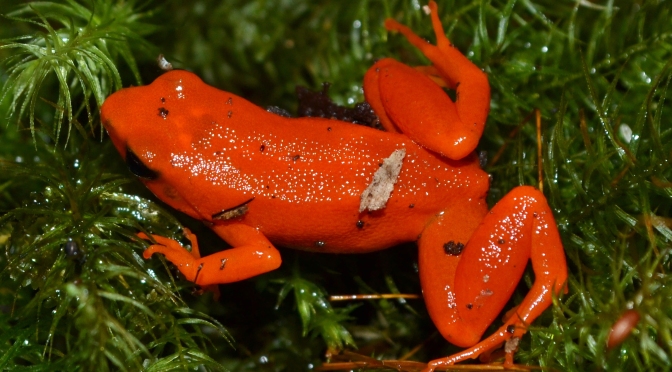 Mantella (also known as golden frogs or Malagasy poison frogs) are a prominent genus of aposematic frogs in the family Mantellidae, endemic to the island of Madagascar. The members of the genus are diurnal and terrestrial in behaviour, exhibiting bright colouration or cryptic markings which are species specific. For further species information, please go to Taxonomy.

Mantella are an example of convergent evolution—the independent evolution of a similar trait with species of a different lineage. In this, they are similar to the family Dendrobatidae from Latin America in size, appearance and also some aspects of their behaviour. However, they are in no means related to the famous neotropical family. During the early description of the first specimens from 1866–1872, Alfred Grandidier described both the brown mantella (Mantella betsileo) and Malagasy mantella (Mantella madagascariensis) and placed them within the Dendrobates genus, based upon their close resemblance to them. Of course, the placement of these new species was ambiguous and heavily debated until in 1882, George Albert Boulenger created the Mantella genus after describing both Cowan’s mantella (Mantella cowanii) and later in 1888 Baron’s mantella (Mantella baroni). The species was named by Boulenger after the gentleman that collected the specimens, Rev. Richard Baron who was a missionary and botanist living in Madagascar. Baron was also interested in geology and herpetology, collecting many specimens upon his extensive expeditions across the country. This species of course, is incredibly similar in colouration to Mantella madagascariensis with exception to the ventral/underside markings. In 1889 after the description of Mantella baroni, a French naturalist called Alexandre Thominot described a species he named as Phrynomantis maculatus and stated the type locality of the species was upon the Réunion Island. However, not only is this highly dubious but later this locality was corrected to the off-shore Malagasy islands of Nosy Bé and Nosy Komba. Furthermore, Phrynomantis maculatus was to be synonymised with Mantella baroni.

Unfortunately, the genus was still incorrectly placed within the family Dendrobatidae and can be found listed in late 19th century publications as a part of the family. The Royal Natural History (1893) by Richard Lydekker being one such example, writing that the Mantella genus is one of two genera representing the family and that they can be “distinguished by the tip of the tongue being notched; while in Dendrobates of Tropical America the tongue is entire.“

During the first quarter of the 20th century, another three species of Mantella were to be described with the first being the most iconic member of the genus today, the Golden mantella (Mantella aurantiaca) which was described by the French herpetologist, François Mocquard in 1900. In his written works titled “Synopsis des familles, genres et espèces des reptiles écailleux et des batraciens de Madagascar” published in 1909, Mocquard gives a detailed description of Mantella and the species within the genus. Within the document, six species are described including one unsual description of a species named as Mantella attemsi in 1901 by Franz Josef Maria Werner, an Austrian zoologist and explorer. The description (translated) of Mantella attemsi in Mocquard’s work describes that the “First digit extends as far as the second. [Replilatero-dorsal] present, starting at the rear of the upper eyelid. Skin very porous, slightly rough on the back and the head, stomach side smooth; lower back of the legs very rough. Back a dark red-brown, rest of the body black.” This species was later synonymised with Mantella betsileo.

All the species of the genus are considered small frogs in morphology, typically varying in sizes of 18–31 millimetres (0.71–1.22 in). A common characteristic across most species within the genus is that species are sexually dimorphic in size, with female specimens usually being larger than males. Mantella are often compared to the neotropical family of Dendrobatidae due to their use of aposematism (from Greek ἀπό apo away, σῆμα sema sign), a defense mechanism that uses dramatic colourations to deter potential predators. Colourations and markings vary from species to species, with combinations of green, red, orange, yellow, blue, brown, white and black. These colourations are often evidence that the specimen is, to a degree, toxic with pharmacologically active alkaloid secretions. There are of course, huge similarities between a few species of Mantella and Dendrobatidae when it comes to colouration, the most notable being between the Golden mantella (Mantella aurantiaca) and the Golden poison frog (Phyllobates terribilis) which clearly is reference to their uniform yellow colouration. Another example being between Cowan’s mantella (Mantella cowanii) and certain variations of the Harlequin poison frog (Oophaga histrionica).

The use of aposematism continues on to the ventral side of the specimens in most members of the genus, excluding the Golden mantella (Mantella aurantiaca) and Black-eared mantella (Mantella milotympanum). The venter is normally uniform black, dark grey (in places) or brown depending upon the species in question which are marked with blueish or white spots, flecking or blotches. Regarding the throat pouch, there are similar blueish to white markings in the form of either spots or a continuous horseshoe shaped marking upon it. This, in species such as Baron’s mantella (Mantella baroni) and the Malagasy mantella (Mantella madagascariensis), can distinquish between the two very similar looking species when not looking at locality data.

Generally, species of the genus posses, in appearance, a very stream-line to plump/rounded body with skin that is either smooth or has a fine granular appearance to it, this of course is species dependant. They have a small angular head, with large prominent eyes which are either entirely dark in colouration or possessing a lighter colouration around the edge of the iris. Species in the genus have a very distinct tympanum that is the same in male and female specimens in size. The tips or discs of the fingers/digits are slightly enlarged, similar to that of the Dendrobatidae family but the specifically to the Climbing mantella (Mantella laevigata) they are distinctly larger than other members of the Mantella genus. The fore limbs possess four fingers that are completely devoid of webbing, whilst the hind limbs have five that are devoid of webbing as well. Continuing with the hind limbs, the tibiotarsal articulation roughly reaches between where the forelimb connects to the body to the nostrils.

However, some members of the genus such as Ebenau’s mantella (Mantella ebenaui), brown mantella (Mantella betsileo) and Cowan’s mantella (Mantella cowanii) are highly adaptable and have been recorded being found in unusual places. Upon the island of Nosy Boraha (Sainte Marie), specimens of Mantella ebenaui have been found living upon dumps of rubbish feeding upon flies. The same has been apparently recorded in the western parts of Madagascar with specimens of Mantella betsileo inhabiting rubbish piles behind human living accommodations.

There are several populations of Mantella species that exhibit more unusual colourations, some of which being intermediates between species living sympatry. For example, there are populations of yellow mantella (Mantella crocea) and black-eared mantella (Mantella milotympanum) from Fierenana, Andriabe, Ambohitantely Reserve and Savakoanina that have green, red and yellow colourations. Due to this, reliability of distinguishing the two species is therefore not possible.

Baron’s mantella (Mantella baroni) have also been reported at Pic d’Ivohibe Reserve being almost entirely green in colouration with black patches and spotting, lacking their distinctive orange and irregular black crossbands. These specimens are normally referred to as Mantella aff. baroni.

Malagasy mantella (Mantella madagascariensis), a similar species in appearance to Mantella baroni, is also noteably variable in different localities. Niagarakely is one such locality within the Anosibe An’ala District of the Alaotra-Mangoro Region, which exhibits a highly broken yellow/green and black mottled dorsal colouration.

There are currently 16 species that make up the genus of Mantella, with five recognised species groups.Most of the species can be easily indentifiable by their colour patterns, although there are a number of locality variations which have a uncertain taxonomic status.