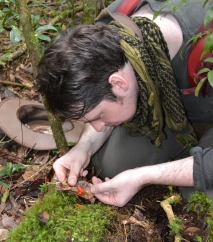 Joshua is a herpetologist specialising in the specific field of batrachology (amphibians) and has studied at several facilities including Sparsholt College, Hampshire where he also worked on the Herpetology Team. He has a lot of experience and knowledge regarding the fauna found on the island of Madagascar, especially regarding the genus of Mantella, which he has been keeping for seventeen years. Joshua has performed a lot of conservation work in Madagascar, especially at Association Mitsinjo’s facility, the Amphibian Survival Assurance Center of Andasibe. He is a blogger for Amphibians.org, ASA, ASG and is in the process of publishing his book on Mantella and different scientific journals.

Audra Barrios is a marine biologist who has spent the last 11 years working with everything from chimpanzees to jellyfish at various institutions including the California Academy of Sciences. She founded Lick Your Eyeballs, a company dedicated to connecting people to the natural world through live animals programs with reptiles and amphibians. She works daily with a dozen species of geckos, including many Phelsuma (day gecko) species from Madagascar. She is committed to protecting the environment through education and raising public awareness. 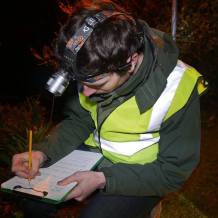 Steven is a zoology graduate from Anglia Ruskin University, Cambridge where he cemented his passion for reptiles and amphibians. He is the current chairman of the Cambridgeshire and Peterborough Amphibian & Reptile Group (CPARG) and helps to organise and coordinate a number of amphibian and reptile surveys around the county, to better map the distribution of amphibians within Cambridgeshire. Steven has been a blogger for The Wandering Herpetologist, BioWeb and Wildlife Articles. Recently he completed an internship for IUCN SSC Amphibian Red List Authority where he assessed the amphibians of south-east Asia for the Red List. He’s also a member of the SAVE THE FROGS! Task Force and Amphibian Specialist Group. Steven regularly publishes scientific articles on his research and observations across a number of different scientific journals.